Anna Upsets #10 at Wimbeldon,
Says She Rather Talk About Bras 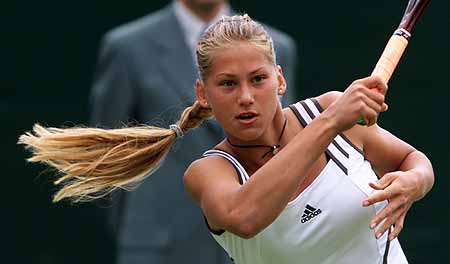 WIMBLEDON, England (AP) - Even if Anna Kournikova was uglier than a shanked overhead on match point, she would still have a beautiful game. Kournikova hits harder than Martina Hingis, moves better than Lindsay Davenport, mixes her shots better than Venus Williams and volleys better than any of them.

All of her strengths were on display Monday in the first round at Wimbledon, along with her biggest weakness: She's still learning how to win. Kournikova blew a big second-set lead and nearly lost a big third-set advantage, but still beat 10th-seeded Sandrine Testud 7-5, 5-7, 6-4. Kournikova's best win this year ensures at least a second round of Annamania, the curious phenomenon that makes an unseeded teen-ager Wimbledon's biggest celebrity simply because she's a beautiful blonde.

In London newspapers, special sections previewing the tournament offered a cornucopia of Kournikova coverage - mostly photos. One tabloid ran a picture of a topless Kournikova lookalike, surely prompting plenty of double-takes by subway commuters. Demure by comparison are 1,500 new billboards along British roadways showing the Russian in a sports bra. The daily Wimbledon program, reflecting England's tolerance for sexism, touted Kournikova on Monday as "Dish of the Day." She was assigned the first women's match on Centre Court, attracting a capacity crowd that included the Duke of Windsor and her on-again, off-again boyfriend, hockey star Sergei Federov.

Speculation about Kournikova's romantic relationships is part of Annamania, even though she's mum on the subject. At a recent news conference to promote the line of bras she's endorsing, she coyly cut off questions about her personal life with a memorable response.

When she reached the Wimbledon semifinals at 16 in 1997, she was regarded as one of the teen queens poised to take over the women's game, along with Hingis and the Williams sisters, Venus and Serena. Injuries curtailed Kournikova's progress, and three years later she's still seeking her first tournament title.

She has slipped from a career-high 10th in the rankings in 1998 to 19th this week, which is why she's unseeded. But of all the Grand Slams, Wimbledon offers her best chance for a breakthrough. "I feel comfortable on all surfaces," she said, "but grass probably the most."

Kournikova played well at the outset against Testud, but let four set points slip away before winning the first set. In the second set she led 5-2, then lost five consecutive games, failing to convert a pair of match points along the way. In the third set, she again led 5-2, let another match point get away, lost her serve and flirted with disaster before settling down to close out the match.

"I got a little bit, of course, uptight," she admitted. Such shaky play could be viewed as enhancing Kournikova's charm - she's not perfect! - but instead the media and many players are annoyed that she remains popular despite her struggles on the court. Anna bashing has been a predictable reaction to Annamania.

"What's the problem?" Serena Williams said. "I don't see a problem with what she's doing. She's just being herself."