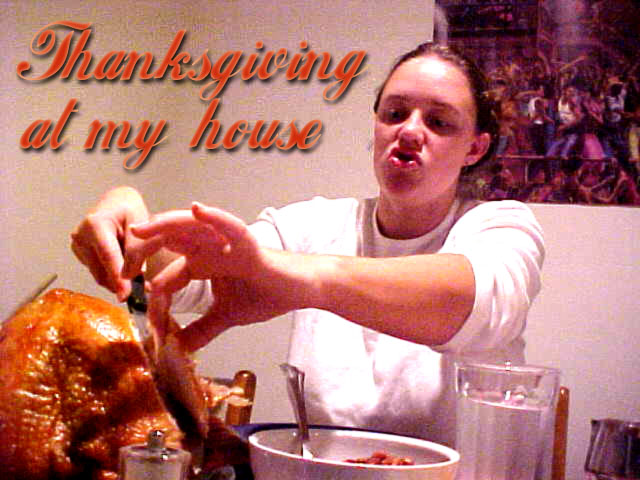 have you figured out why my girlfriend is

breaking up with me yet? look at her carving that beautiful turkey. she made everything. mashed potatoes, sweet potatoes, carrots, string beans, black eyed peas, sour kraut, muffin

s, dressing, stuffing made of crackers ... yes i love her, yes i made her cry, yes that is the most unattractive photo ever, and yes that is the good times painting behind her. this is thanksgiving at my house.

tried to get the tv to show the game but we are in this huge building and our window points to the beach so there was no game.companies should make sure their people can watch that game. this goes for the super bowl too. thanks. it's not like anyone watches it or cares about dallas and detroit but theres something soothing about our modern traditions like football on t.v. and seeing snoopy in the parade and a big ass turkey in your oven.

even if it's for two people who have lived together for a long time and by now we should know how bad we are at eating leftovers. (or not eating leftovers.) here it is the day after turkey day and i went to fatburger and i might go back tomorrow cuz it was so damn good. even now, hours later, cold, its still good. marilyn manson is on mtv2 and have i told you how much i love marilyn manson. i saw him twist his ankle at the forum in la and you wouldnt think that it is rock and roll to twist your ankle due to your high heel but it is. we almost rioted. instead we were oddly satisfied like the devil had bled for us - not for those hicks in the other cities in the tour but for us. thanks marilyn. now do it again fucker.

once an employee comes home from working on a holiday, i believe that he is due some really good lovin. again, this is just my opinion and yes, ladies, i know that you slaved over the meal waking up at 9am going to the store, coming back, and cooking and not getting a chance to sit until 7pm. blah blah blah. well i say now it

is time to celebrate. enjoy the fruits of your labor. if we had kids we'd have to be talking to them now, but we don't: lets spend the nighttogether. but who's fooling who, im no salesman. i dont know shit. i should be lucky to have a nice cooked meal and a job. people laugh when they see my resume and wink when they see what college i went to. sex - with a girl! - i should be so lucky.

after dinner we ate ice cream and rollos and passed out watching t.v.

it was the best thanksgiving ever.