i heard the news, baby, all about your disease 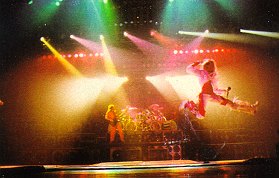 if you follow rock and roll long enough you'll get your heart broken. i promise.

your favorite bands are going to break up, put out bad records, fire the best guy, kill themselves, marry actresses, mellow out, sell out, put keyboards in their music, make really bad live records, hire horrible singers, and even become ugly drunks.

van halen did all these things. almost effortlessly.

and i dont care that mike royko started his career writing obituaries on the night desk, im sick of using this black background and pining away at the past achievements of my former rock heroes. im supposed to be meeting hot chicks and making up lies about the fbi. instead im reading that eddie van halen still has the same tongue cancer that he had nearly a year ago. but this time it's serious.

and for some reason im angry at him. doesnt he owe me some good records or something?

i ask you: is neil young the only rocker who can age gracefully with some bite left in his guitar?

i saw springsteen on hbo and he looked stiff and over-fed. i saw dylan at the grammys and he thanked his lawyers. i saw angus young on behind the music and, tell me, why was he on there?

eighth grade dave ogborn got women and children first for his birthday and we went over to his house after school and even though rock and roll radio was alive and well and guitar was all over the radio, it wasnt eddie van halen guitar, so we had to sit down for a second and soak in what we were being exposed to.

when van halen had their shit together, they were in the same class as the stones or zeppelin and if anyone tells you differently quit talking to them about rock music because they lie and theyre stupid. 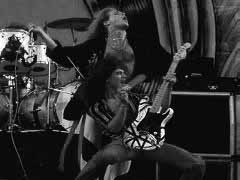