amy's getting married today! that means im going to tell you a bunch of daily nexus stories cuz amy was the gorgeous and ridiculously talented editor-in-cheif of the nexus when i peaked at the place. ok. first let's get the sexiness out of the way - she'd wear these tight jeans, shed wear skirts occasionally, or sweats, but she'd wear these tight jeans and everyone sat on the tables but some nights we'd be debating something dumb and she'd sorta just stretch out on the news desk and, well, then we'd get beers. amy was not afraid of drinking. a true journalist. ever see His Girl Friday? the 40s film where the woman reporter knew it all and was still totally feminine and even cary grant looked a little dorkish next to her? that's our girl Amy.

so one day the sports editor was having a nervous breakdown. his girlfriend was going to break up with him, his frat was going to kick him out, he had a Spanish midterm he was about to fail, and he was in tears. Amy calls me in and I see him weeping and she says, tony, can you be the Sports Editor? i had maybe written one or two Sports columns and they stunk, but there are some people who possess so much clout that when they ask you something, they're really telling you something, and you're an asshole if you say no because they wouldnt ask you if it wasnt the right thing for you to do. so i took the raise and the salary and the office and after a week i understood why my boy was in tears. that job was hell! you had to be up till 3am three nights a week, you had to write headlines, lay out two pages, edit stories, chop the words of 8-9 excellent writers, deal with photographers, artists, coaches, players. you barely had any time to get drunk. fuckin a, man!

so imagine what it was like to be editor in chief. especially in a sorta sexist office. sure, the women were just as talented as the boys, but we were louder and dumber 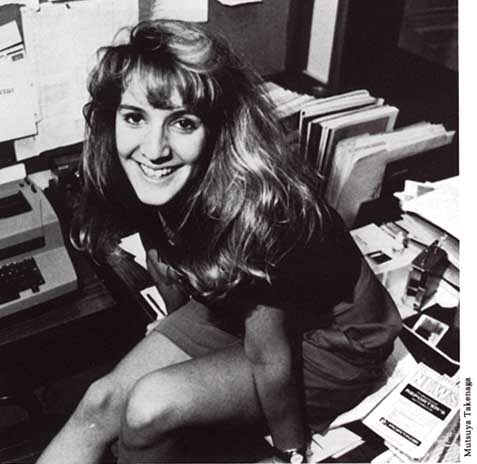 the best bosses that ive had have always pushed me. amy gave me that editor job and freedom, but not full-on carte blanche. when the gauchos upset the #2 ranked UNLV basketball team we were both there and met up at center court as the students bum-rushed the court and i yelled, "i need a full page!" she yelled, "you've got the front page, a sidebar and the Sports section!" i yelled, "what? this is the news of the day! gimme the box on the front page and jump me to a full page. we can do this. we have three photographers right here, two reporters, you, me, this is why we're here!" it was 11:30pm; i was stoned and giddy. she was sober and right. you can't just start reporting at midnight. write at 12:30, edit, copyedit and have the paper out by 3. i know it doesnt seem that hard, but news should be going to copy at 5pm - 1am is stupid. this is the shit she had to put up with. then when i ran for EIC several months later, i said some bad shit about her, maybe the worst ever. i dont think i could apologize enough for that. once again, she put up with it and sucked it up like a pro. when holly hunter remade the film and called it Broadcast News, that was Amy too.

one of the things that we debated back in the day was my use of curse words in the opinion columns that i regularly wrote. she argued that i was a good enough writer that i didnt have to use the foul language. i disagreed. i said that words were our tools as writers and if i wanted to use a sledgehammer, as an artist, that was not only my right, but my duty. one night the campus had a blackout and it fucked up our shit. for some reason we had a generator at the paper and i sat down in my Sports office and banged out "Just Words" which led with "fuck fuck fuck." totally inspired by amy, and totally the best thing i ever wrote at the nexus. the last 6 inches could have been edited better, but, whatever.

born in bakersfield, amy went off to prague with the real journalists after graduating from the nexus. she reported for the Gilroy Whatever for way too long when she came back to america. she edited for the LA Daily News, wrote for Reuters & abcnews.com and now shes getting hitched to the cheif of Reuters North America or some shit. well good for her. he's a lucky man and in a few hours my man ben and i are going to drive up to santa barbara and have a drink with her, dance around, and drive home. sigh.

amy was easily the best editor a boy like me could ever have. she's about 2.5 times smarter than me, 5.5 times wiser, and 10.5 times more professional than i will ever be. we exchange emails about going back to the Nexus and lecturing the kids on How Things Should Be. but it's worthless. kids dont listen. in a perfect world she and I and some of the others would travel the States teaching college papers that you can be smart and funny and timely and brilliant and fearless and all the things that amy is and do it in print. daily. and they'll put us up in the local Best Western but we'd rather pass out on their couches as the sun rises on the coors light empties stacked on the coffee table.

cuz lord knows we havent had enough of those nights.

but tonight, we will drink something slightly more expensive, in the best city in the world, and toast a classy broad and her fortunate mate. and if that fuck doesnt bring her all the happiness that she has coming, there will be a long line of boys and girls who will fuck his shit up old school.