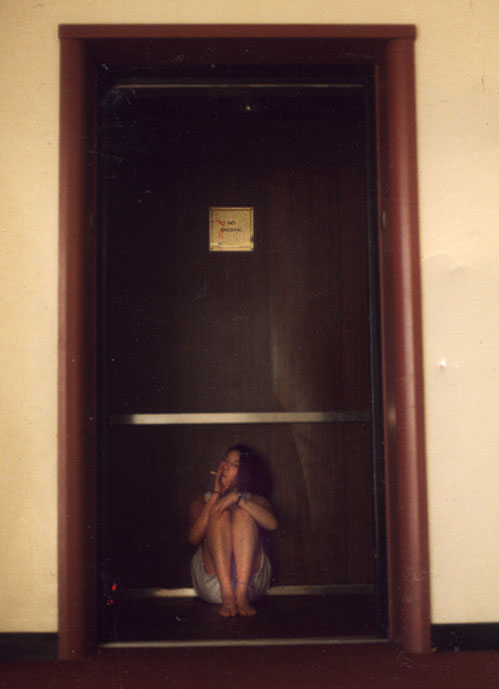 when i first met linda she was a seventeen year old runaway sleeping on the floor of her friend mike's room bumming smokes and walking around barefoot. half japanese half crazy we instantly hit it off. i hadnt started writing for the paper yet but i knew enough to ask if i could "interview" her on my single bed in my dorm room while she fried on acid. one of the questions i remember asking was when was the first time she ever had sex. she said that she had never had sex before. two weeks later that had changed. not from me, mind you, but i was one of the first people that she told. i remember clearly how she told me: i was driving back to sb after a weekend in malibu and she saw me park and ran toward my car yelling, "tony, i got laid i got laid!" and insisted on getting into great detail about how it hurt at first but how she kept at it and it eventually felt so good that she did it again and again all weekend. normally i dont reveal so much about my friends, but she said it so loudly that i would be surprised if you didnt hear it too, no matter what corner of the world you were living in at that time.

linda was definitely a free spirit and the boys loved her and most of the girls loved her too but were certainly aware of the affect that she had over the fellas, and that was too bad because she has a heart of gold.

i dont remember the first time that she and i actually got physical but i do know this: Linda was the shortest relationship that i ever had clocking in at a ridiculous two weeks. but it's cool, there were no hard feelings.

the lemonheads have a song called "drug buddy" and i dont know what evan meant by it but, at ucsb there was rarely a shortage of things to experiment with. and one of the best things about our relationship was that if we were ever involved in one of these experiments, sometimes it was nice to have someone to hold hands with, or kiss, or ramble with, or be frightened with, or get naked with. and we were each others buddies for a few years and that bond was amazingly trusting and strong. and because we went through heaven and hell together during those trips, whenever i wrote a new book of poems or collection of stories or whenever i was looking for a completely mind-blowing evening, linda was my first thought. and i was hers.