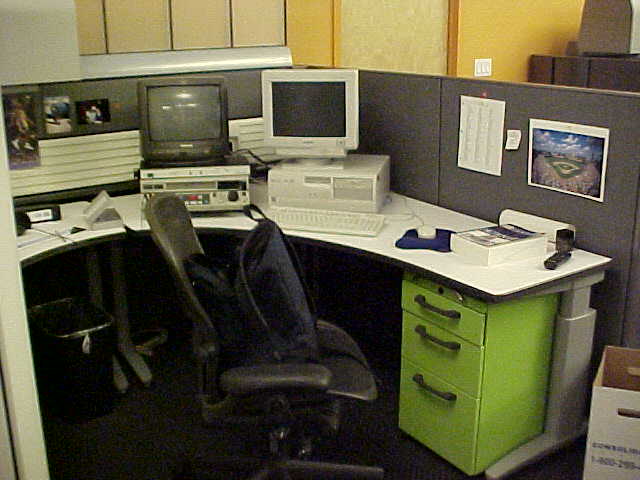 this is where i sit for eight hours a day. about a dozen people go through that door every day. on the tv screen i look at celebrities and models. i wear headphones and it messes up my afro. on the computer i research things. i check for spelling. some how "homosexuales" came my way. i was doing something on melissa etheridge.

for two days straight ive been learning about melissa etheridge. something i would have never done before this job. the work that i do is not very creative, or stressful, but did you know that melissa was born in kansas and moved to LA in 1982. yep.

back then the sunset strip was all heavy metal bands so she went to this little bar in Long Beach, of all places, and starts playing there and plays there for 4 1/2 years! if i was her friend i would have totally said, melissa, you moved to LA from Kansas and you've played this stupid bar in Long Beach for four years? Go play in Hollywood, West Hollywood, but not Long Beach?

Turns out a women's soccer team stumbled into her bar, loved her, kept going to see her, one of the few straight ones was married - to a music agent, who, of course signs her on the spot. a few years later she wins a grammy and the year after that sells 6 million records.

metro escalator update: a wilshire/western big escalator was broke this morn. they did have two guys workin on it, though. and it was fixed by the time work was done. but then a little escalator was stopped at sunset/vermont at 7 pm. of course it had been perfectly fine 8 hours previous.

if you want to save electricity, use some of all that real estate above the subway station to collect some solar energy. make em look like big stupid statues. oh thats right, you already have a collection of big ugly statues. put some solar panels on 'em and pretend theyre angels. use the power to run the lights, if nothing else.

i did have a very nice big fat bus driver who said hello how are you to everyone who came aboard.

if i had a button maker i'd make this button:
McGet McGriff.